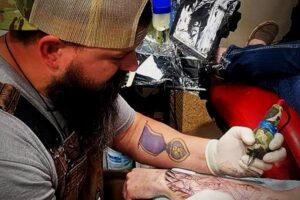 Joe Pawlowski is a U.S. Marine Corps Purple Heart veteran and a tattoo artist. Joe was shot twice while serving in Fallujah, Iraq in 2006 by sniper fire. Consequently, he was severely wounded. Joe began drawing and painting as a form of therapy for his arm, hand, and mind after an extensive recovery. Presently, he uses his art as a way to serve others and himself. The veterans he tattoos call a session with him “pain therapy” and are loyal clients to his private studio, Devildog Ink & Paint LLC. These tattoo sessions are a way to help Joe and his clients vent in a comfortable environment while permanently placing a beautiful piece of artwork on their bodies.

It’s was an absolute honor to interview Joe and pick his brain. So, Veteran Ink fam, we would like to introduce you to the one and only Joe Pawlowski!

Life in the military

Q. What branch of the military did you serve, and for how long?

Q. Do you recall your first day at boot camp? How did you feel? *

Q. Do you have any advice for young people enlisting in the military today?

A. Do what you’re told as fast as possible, and watch for IEDs.

Life after the military

Q. Why did you join the military, and how has life been since retiring?

A. I joined the military to be a part of something bigger and to fight for this country. Getting out was hard at first, but God kept me here for a reason. So now I take care of my family as best I can and help other veterans.

Q. What was the biggest lesson you learned in the military?

A. Hurry up and wait. Move faster. Adapt and overcome—most of all, teamwork.

Q. What was one of the biggest obstacles you faced when getting out of the military?

A. For me, it was hard being away from my brothers. We trained together and fought together every day. After being shot, I was alone more for the first time in over a year. I was going through recovery from my injuries and, at the same time, a divorce before I even stopped bleeding pretty much. I was drinking a lot and getting kicked out of bars. It took me a couple of years before I could manage myself again. I missed my brothers that didn’t make it, and I wasn’t sure how to deal with it.

Being a veteran tattoo artist

Q. Why do you think tattoos are so popular in the veteran community?

A. Tattoos tell stories, they show pride, and they provide a little pain to let you know you can still feel.

Q. Do you have any tattoos related to your military experience? If so, what are they, and what do they mean to you?

A. I have the combat cross on my ribs for the 22 marines from our unit killed in Fallujah. On my left forearm, I have a purple heart done by an Army veteran named Matt Kaufman. I also have dog tags and a war scene on my leg that I did myself. Each of the dog tags has the names of the six marines that were from our platoons.

Q: As a veteran yourself, what does it mean to you to have the opportunity to tattoo so many veterans?

A. It’s an honor to me to be able to tattoo other veterans. I started doing art again as therapy for myself mentally and physically. After being wounded, I had a long recovery, and art was a huge part of it. Now I am thankful I can stay in touch with so many veterans through tattooing and painting.

Q. As far as veteran tattoos you’ve done, is there a piece that instantly comes to mind when someone asks which meant the most to you?

A. Yes, there is. I did a rifle, boots, and kevlar (combat cross) on one of my marine brothers. A few years later, he passed away days before his birthday. On his birthday, I did the same tattoo in the same spot on his brother. That meant a lot to us both. I love doing the rifle cross because it shows us who lost somebody too. It makes people think of the sacrifice.

How’d you get started?

Q. How long have you been tattooing, and how did you start?

A. I have been tattooing for around ten years. In the beginning, I tried doing an apprenticeship, but my anxiety kept getting the best of me. At one point, a shop tried to cheat me out of thousands of dollars upfront to apprentice me. The guy was acting as though he would work with me but soon, it became clear he just wanted the money and was planning on ditching me as soon as he got paid. That was the last straw, and I decided to go about it my own way. I read a lot and learned as much as I could.

Eventually, I purchased a chair and my gear and started tattooing people for free out of my sister’s basement. I know it wasn’t the best route to go, but one thing being a Marine taught me was to adapt and overcome. For the first couple of years, I wouldn’t charge anyone. I would take donations or ask for just materials cost. Soon word of mouth spread. I was busier than I could handle almost. Now I do tats out of a local shop in my town (Desired Skin), and I have a private studio for veterans with PTSD that may not want to be in a public place.

Q. Your veteran clients, AKA your brothers and sisters, call getting a tattoo with you “pain therapy.” How did this term come about? Can you explain to our audience what “Pain Therapy” is?

A. It started as therapy for me, first doing art. I have dealt with the pain of my injuries for years, and when I began working with primarily veterans, I found that it was beneficial for them also. Brothers have called me at 2 am or random times talking about suicide and other stuff. Therefore, I try and get them in the shop right then for a few hours of ink. Then the next day, they wake up alive. Some guys I may have never seen again after being out if it wasn’t for tattooing.

What better excuse to hang out with your friend for six hours than to get a tattoo. I feel my story actually helps other vets open up more, and we talk and share stories. It’s Pain Therapy for both of us. They get the pain, and I give it. In the end, we are both better off.

Catch up on our past interviews by checking out our Veteran Ink blog!