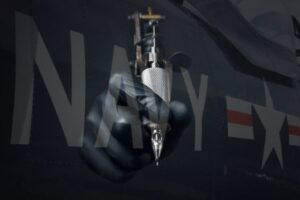 Who is Matt Davies?

Veteran Ink recently had the pleasure of interviewing the one and only Matt Davies about his experience in the Navy, his transition into civilian life, and tattoos in the military and veteran communities. Matt is a Navy Veteran and current Director of Outreach for Operation Tattooing Freedom– a nonprofit that connects veterans to veteran tattoo artists in their area. He has been a massive supporter of the Veteran Ink brand and mission from day one. During the outbreak of COVID-19, Matt began promoting tattoo artists on social media to help them attract new clients, which granted him the respect and appreciation of artists all over the country.

Matt is not only a great friend of our team here at Veteran Ink, but he’s an overall incredible man, and we were honored to take up some of his time to introduce him to you.

Life in the military

Q. Did something specific or someone in particular influencer your decision to join the Navy?

A. I decided to join the Navy because when I was 16, and I knew I would never be able to afford college, so I knew I needed to do something. The military would eventually pay for my school and allow me to see the world, experience life outside New Jersey, and build a skilled trade in me.

Q. What was your favorite part of being in the Navy?

A. I made so many friends and was lucky enough to see so much of the world I never thought possible.

Q. What was the best part of getting out?

A. The best part is being able to be with my wife for more than 2-3 hours at a time.

Q. Military personnel often face many obstacles after retiring from the service. For you, what was the worst part about getting out?

A. I genuinely miss the men and women I served with and the family that we were.

Q. Do you recall your first day in the Navy? How did you feel?

A. Boot camp, yes, that was well, that was an experience. Nothing quite like being called some “very motivational” names at 4 am.

Q. Can you tell us something you learned in the Navy that you would pass down to your sons?

A. That you have to take the good with the bad, don’t harp on the mistakes- adjust and make it a lesson learned.

Q. Do you have any advice for those wanting to enlist today?

A. Take advantage of all the military offers; you can go to school while active, get your qualifications and certifications, experience the world, and learn from as many people as possible.

Life after the military

Q. I’m sure you learned a lot from being in the military, but what was the biggest lesson you learned in the Navy?

A. I learned that no matter what rank someone was, those people I served with I trust with my life, and I had only just met them. I learned how easy it is to rely on someone you’ve never met will have your back through thick and thin.

Q. How was your transition into civilian life after getting out of the service?

A. It was challenging because the job I had chosen didn’t translate to civilian work very well. Eventually, I landed my dream job.

Q. You are now Outreach Director of Operation Tattooing Freedom. How did you get the position?

A. During the Pandemic Shutdown, I took to social media to promote all tattoo artists and shops. It was just before I got a tattoo through Operation Tattooing Freedom, so I made it a point to include OTF and their artists in my promotions. When the pandemic started to ease up, and things opened up, they asked if I wanted to be a part of the team.

Q. How did you find out about OTF?

A. I was in a very dark place- suicidal- and I was trying to find a way to cope with my anxiety and depression. Shortly after, I found OTF on Instagram and started looking into their organization. I filled out an application and was able to get tattooed a couple of weeks later.

Q. As the outreach director, what is your favorite part about working for OTF?

A. I not only get to be a part of the tattoo industry, but most importantly, I can help veterans like me who struggle with PTSD.

Tattoos in the military

Q. Tattoos are extremely popular in the military and veteran communities- why do you think that is?

A. Tattoos are a right of passage in the military. Many people get tattooed the day they graduate boot camp because it’s the transition from civilian to active duty. Service members often get them to show their representation of the military and also to showcase all the places they have been.

Q. As far as tattoos go, what tattoos do you have related to your military experience? Why did you get them? What do they mean to you?

A. I have a sailor Jerry clipper ship on my outer forearm and a Japanese Lion and Phoenix battling on my ribs. I got the clipper ship from OTF to represent my time in what I consider the old school navy. My ribs were done in Japan while I was stationed there by Japanese-style hand poke.

Q. Operation Tattooing Freedom focuses on the healing elements of a tattoo session. In what way do you think tattoo sessions can be healing for veterans?

A. We offer vet to vet tattoo sessions where we use a set of basic questions and experiences from the military service. During the session, we learn about the vet’s time in service and help them become more open to talking about the event that caused so much trauma which also helps us see if they need more intensive help. We also keep in contact with our clients to see how they are doing and make sure they know they have someone to talk to when times get tough.