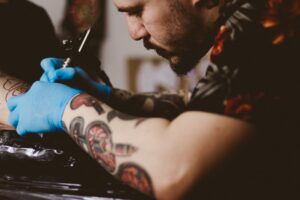 Therapy comes in thousands of different forms and methods. What works for some might not make a single difference for others.

As a page dedicated to featuring veterans and the stories behind their service-related ink, we have come in contact with the term “tattoo therapy” quite a few times. Yes, you read that right and yes, it’s a thing.

As it turns out, tattoo therapy for depression, anxiety, and PTSD is a hot topic right now. This isn’t just some taboo subject pulled out of thin air… Doctors are backing evidence that proves getting tattoos can have extremely beneficial effects.

We’ll tell you exactly how tattoo therapy helps veterans suffering from depression, anxiety, and PTSD. Let’s walk through the process of getting a tattoo and soon you’ll see why this badass form of therapy can really help.

The Benefits of Getting Tattoos

As you may have experienced, there is a certain level of anticipation before getting a tattoo — sometimes fear — for the process which sparks the first round of adrenaline.

That adrenaline builds as you walk through the parlor door… then to the chair. Before you know it, your artist pulls the ink and their tattoo gun out. Now here comes the first stroke of the needle.

As an article by Psychology Today stated, the endorphins released when the brain’s pain receptors are triggered helps mask some of the pain while getting your tattoo. Emphasis on the “some.”

In an article by Bustle, Lisa Barretta, author of Conscious Ink: The Hidden Meaning of Tattoos says tattoos can be healing for some people.

“Since the process of getting tattooed can actually release endorphins in your brain, due to the sensation caused by the needle. “[Endorphins] are your body’s natural pain relievers.”

Lisa goes on to say that endorphins are chemicals that make people feel good and help them realize that they are more resilient to pain than they think — That’s why getting tattoos can be therapeutic.

Lisa also told Bustle that people should pay attention to how they feel emotionally after getting a tattoo.

“Tattoos can trigger buried feelings that rise to the surface for release. It either happens right away, or the effects of the shifting energy kick in weeks later.”

Many people consider getting a tattoo a “natural high” because the dopamine runs through your body after reaching your reward — your new tattoo!

Talking To Your Tattoo Artist Helps

Aside from the chemical reactions in your body from the pain and adrenaline, there is also the sense of comfort you receive in a tattoo chair from talking with your artist.

Veterans who suffer from anxiety, depression, or PTSD tend to distance themselves from the idea of opening up to others. However, this often changes in tattoo parlors. There’s just something comforting and easy about the conversation between you and the person running a needle gun that pierces your flesh over 1,000 times per minute along your skin, you know?

Veterans who have gotten tattoos as a form of therapy have said they were quicker to open up about past traumas to their tattoo artists rather than their closest friends and family members.

Last, comes the healing process which requires tedious attention to the freshly-inked area. The act of monitoring and taking care of something precious and fragile can help not only distract veterans from their mental disorders but give them a sense of need the same way a pet or stubborn house plant would.

Disclaimer: we are not saying if you suffer from anxiety, depression, or PTSD, you should go run to the nearest tattoo parlor and get your entire body tattooed. Tattoos last forever and if you rush into getting one, you’ll probably get something you’ll later regret.

Tell Us Your Tattoo Story!

Have you ever gotten a tattoo as a form of therapy? If you have, we’d love to hear your story! You can reach out to us via Instagram, Facebook, Twitter, or email.