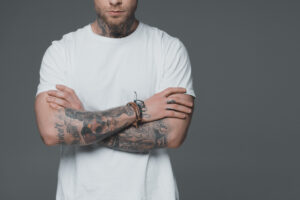 When you hear the word “tattoo,” who is the first person that comes to mind? Is it someone in the military? Maybe not, but tattoos are actually very prevalent in the military. If you have served in the military or know someone who has, then you know tattoos have an extremely significant meaning and signify an important part of a person’s life.

Where It All Started

Military tattoo trends are said to date back to the 1700s when sailors became inspired by indigenous people they came across while traveling. In most cases, sailors would get tattoos that symbolize the places they had gone or the positions they held.

Practices from back then remain the same even now. In fact, there are a few common military tattoo themes.

The military has changed its regulations on tattoos several times. It is now less restrictive on the number of tattoos soldiers can have.

Before, soldiers were limited to four tattoos below the knees and elbows and could not be bigger than the size of a person’s hand. Now soldiers can cover most of their bodies in ink. The U.S. Navy now also allows sailors to have one neck tattoo and full sleeves.

Did you know as of 2009, 90% of combat soldiers have at least one tattoo? Only 30% of the general population has a tattoo. Soldiers also get tattoos as a form of therapy for coping with PTSD or chronic pain.

Although regulations have changed throughout the years, the traditions of military tattoos have not — soldiers continue to get inked up as a form of self-expression.

At Veteran Ink, we want to celebrate and honor our veterans and those serving in the military by telling the stories behind their tattoos. We hope to raise awareness about issues plaguing the Veteran community and let other Veterans know they are not alone.

Let us help you tell your story and submit your tattoo!