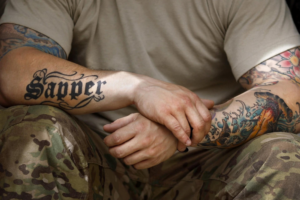 Tattoos are an important part of military traditions. Every branch of the military has different popular tattoos with significant meaning. In this blog, we’ll tell you the most common military tattoos and what they mean!

Before, the Army did not allow any hand or neck tattoos. Now, visible tattoos on any part of the body excluding facial tattoos, have been permitted as long as they are not  “indecent, extremist, sexist or racist.”

Some popular tattoos include:

The Navy has similar rules to the Army — they allow many tattoos; however, they prohibit any visible tattoos on the face or head. Sexist, racist, or offensive tattoos are not permitted.

In the Marines, sleeve tattoos are seen as excessive. They do not allow tattoos on the head, neck, hands, or any other part of the body visible when in uniform. Current marines who violate these policies may not be able to advance professionally or able to re-enlist.

The Coast Guard allows service members to have tattoos cover more than 25% of their body; however, their shirt collar must hide visible neck tattoos. They do allow for one ring tattoo on each hand and permanent eyeliner for female service members.

Are you currently an enlisted service member or a veteran? Do you have any of these tattoos? Tell us what they mean to you!